In a nutshell, the question of whether you are covered comes down to a broad question – was it the result of the elements (Mother Nature) or rather, the lack of maintenance or age. Of course, the caveat to this statement is: if unsure, ask your insurance agent about the coverage of your specific policy.

Examples of roof leaks and repairs covered by insurance would be if the damage was caused by a wind storm, exceptional hail storm, or from fallen trees making contact with the roof. The word exceptional is important in such situations. Any roof that would be damaged to the point of leaking or needing repair as a result of common winds or hail most likely is near the end of it’s life or possibly was incorrectly installed. But if a true “storm” comes by, damage caused as a result of it will typically be covered. Examples of such damage could include such things as missing shingles or shakes, missing flashing, lifted shingles or shakes, or actual penetrations of the roof itself by branches or other flying objects.

Causes of Roof Leaks and Repair Commonly Not Covered by Insurance

Roofs do not have infinite life spans; eventually, they need to be replaced. During the time between discovery that a roof has surpassed its usable life and when it is replaced, a homeowner could certainly be in a situation where any leaks and damage would not be covered by their homeowners insurance. Delay to obtain a functional roof on the part of the homeowner typically will not result in a situation where insurance will cover subsequent damage.

Additionally, latency regarding needed maintenance can also create roof leaks and damage that will likely not be covered by insurance. It is the homeowner’s responsibility to ensure that the house structure is maintained in good condition and that potentially harmful situations are addressed promptly. Allowing moss or debris to stay on a roof for an unreasonably long time can certainly cause damage that probably will not be covered.

As stated above, if you have a situation that is not clearly defined or if you a just not sure where you stand regarding a roof leak or damage, it is best to talk with your insurance professional. Once you are ready to move forward and correct the situation regardless of whose responsibility it is, give us a call – we’ll be glad to help.

Estimates are always Free and Fast, so call today…and relax!

For your roofing needs, contact the experts at All Surface Roofing and Construction! Call or click today!

All Surface Roofing and Construction is licensed, bonded and insured. 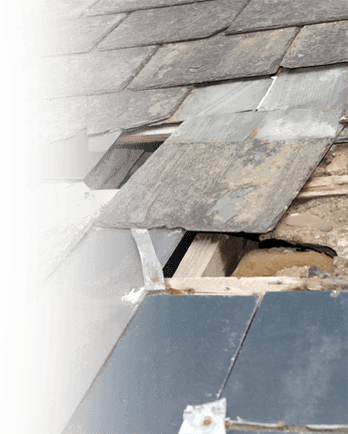 Ask about our financing options which can help in these trying times. Our focus is exclusively on exterior work so there is no need for direct contact with our estimators or crew. We can text, email, call you or talk with you from at least six feet away about your project.

Awesome!
Start My Free Quote.
No thanks,
I'll pass for now.